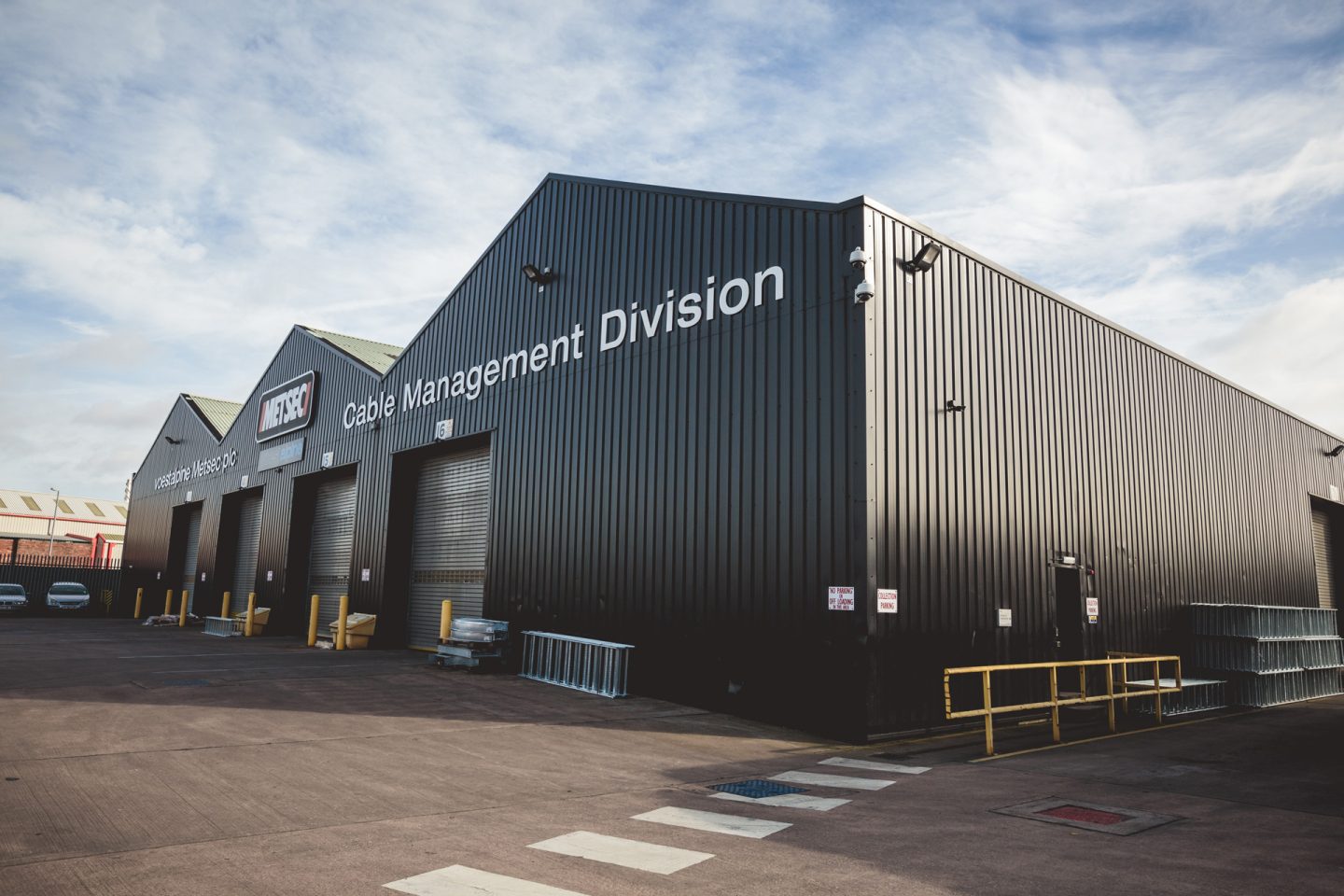 Metsec was originally another subsidiary of Tube Investments Ltd, then called Metal Sections Limited. It was set up to manufacture cold roll-formed sections, which were used for housing electrical installations, for furniture, bus body building and roller shutter industries. It is sited on what was originally the Broadwell works of Accles & Pollock and Oldbury Carriage Works.

Oldbury Carriage Works had been established in the 1850s at the Broadwell site due to the proximity of some thirty iron rolling mills within two miles. It was adjacent to the London & North West Railway line and the canal connected it to Liverpool and London. By 1901 it was Oldbury’s largest factory, employing 2000 men and producing 9000 railway carriages each year up until the First World War. These provided the factory buildings which Metal Sections were later to occupy. Within these walls the first tanks were produced in 1915. Oldbury Carriage Works closed in 1930, and the factory was bought by Tube Investments, to be used by their subsidiary companies Accles & Pollock and Reynolds Rolling Mills. In 1931, TI bought a small 2-year old company who were developing a method of cold–forming metal strips with steel. The company was called Metal Sections and it was initially based at Paddock Works, on Rounds Green Road.

Cold roll forming is a manufacturing process by which metal strips are rolled through a series of differently shaped rollers which convert the strip to a required shape at a relatively low temperature. The process is faster and cheaper than hot metal forming, and gives the metal increased tensile strength. Cold-formed metal was used in buildings, bridges, storage racks, grain bins, car bodies, railway coaches, highway products, transmission towers, transmission poles, drainage facilities and also for cable management. During their first two decades the main market for their products was the motor industry. Then, during the Second World War, they also made parts for armaments, military transport and airplanes (making, for example, the framework for Lancaster bombers, and the ammunition tracks for Halifax and Stirling bombers). After the war, Metal Sections became a separate company within the Tube investments group, moving across the town to the Broadwell site. 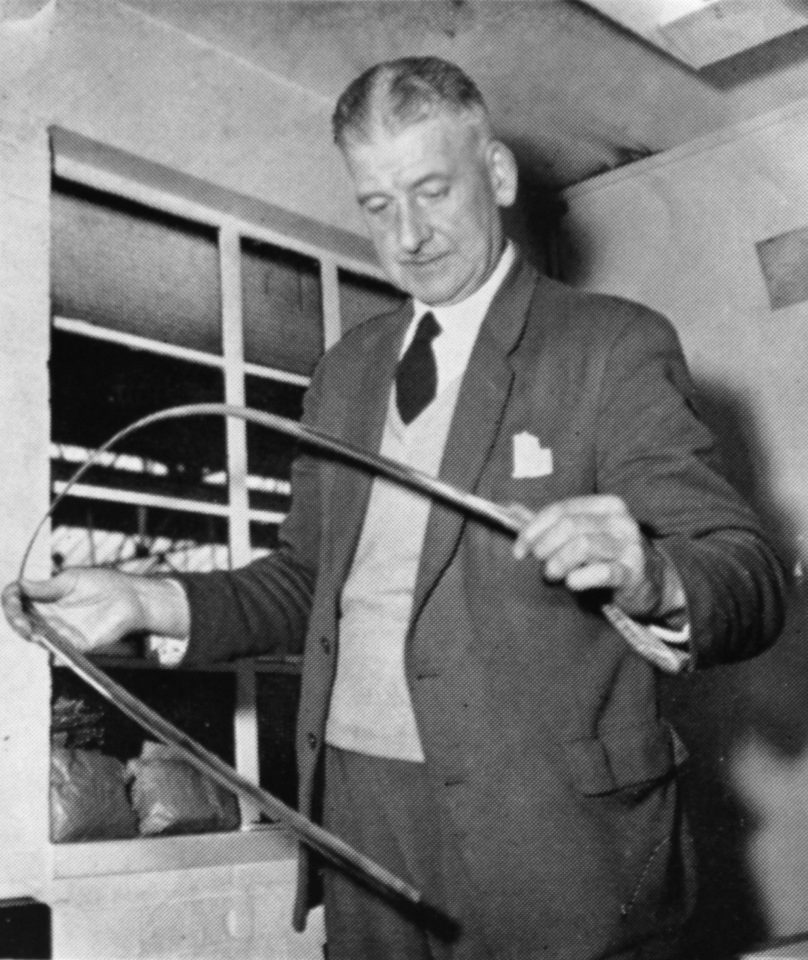 Chief Inspector Arthur Johnson checks a component for the motor industry, 1961. He began at Accles & Pollock in 1926, his first job cutting off on a bandsaw.

Post-war, the company continued to be heavily involved with making components for cars and buses and also began experimenting with the use of steel structures for buildings. Business was picking up. In 1950-51, their company literature boasted of producing:

They also noted: ‘A number of interesting jobs have come along recently, among them being:

(The last two indicate the ever-widening range of cold-formed sections).’ 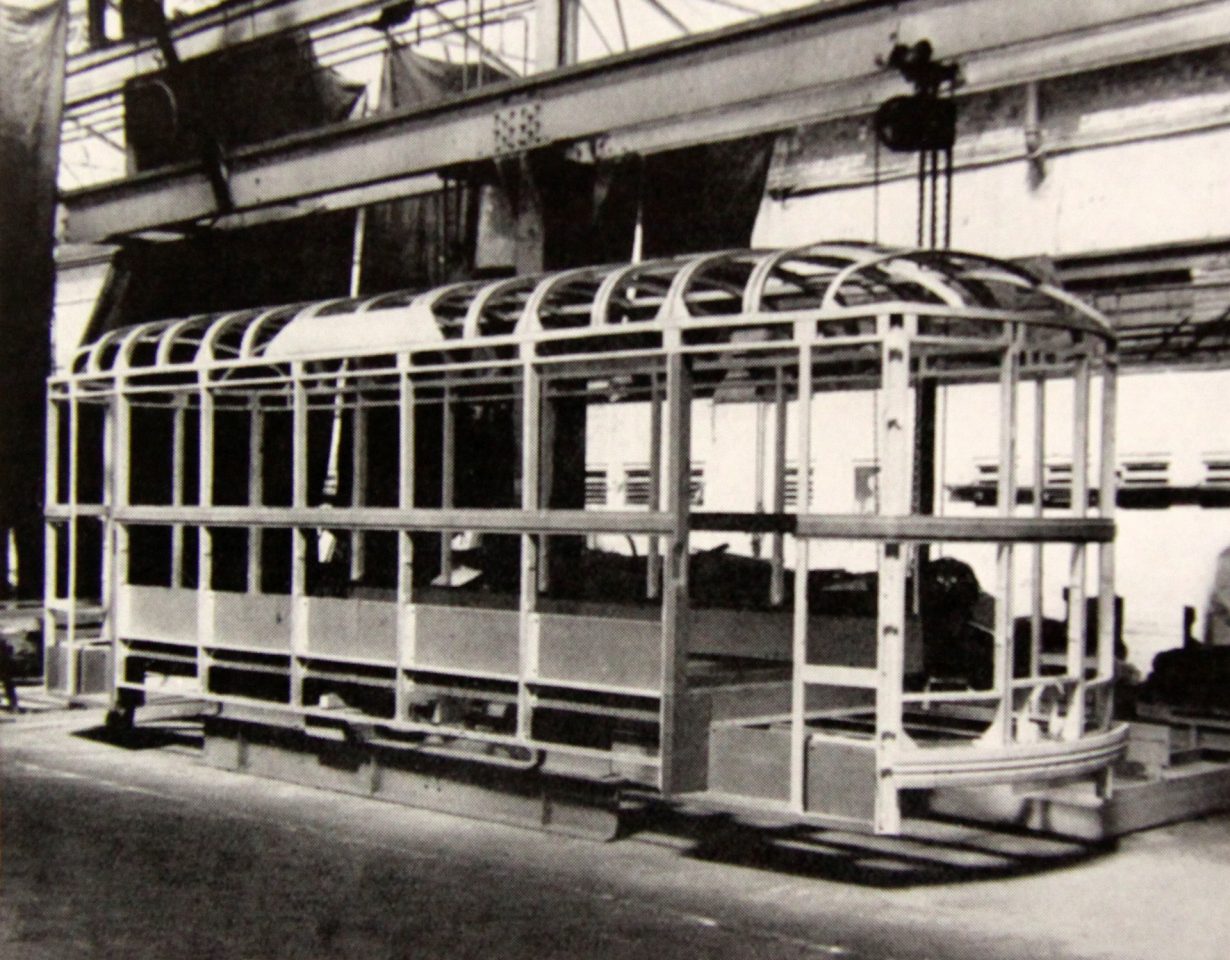 Metal Sections pioneered the idea of producing a ‘Bus in a Box’, producing a self-assembly kit of all the components needed. In 1948, Glasgow Corporation were the first buy into the idea, when they ordered 42 frames for single decker buses that they then assembled on a Daimler chassis in their own workshops. Orders came in from as far afield as Bombay, Buenos Aires, Zambia Town.

In 1950, they reported: ‘The Bus Section has produced some interesting news lately. An order from Belfast Corporation for 24 double deck six wheeled trolley bus framings and three steel and three aluminium framings for bread vans complete with cabs. In addition the Ulster Transport Authorities have ordered four 60ft diesel-engined railcar framings of integral construction, with a promise of a further 12 to follow. An enquiry from Peru for two diesel-engine railcar framings is in hand, and we every confidence the order will eventually be forthcoming. We also have on order 700 bus skeletons and 610 cab frames.’

In 1954, the company received an order to supply 24 warehouses for a United States Air Force base at Burtonwood, near Warrington. The design team at Oldbury believed it was possible to make a span of 33 metres using cold-rolled sections (whereas 7 metres was generally held to be the maximum). To successfully prove their concept, a full-scale experimental bay had to built and tested to destruction. The final job required 1,500 tons of steel strip to be rolled into 400 miles of section, and fabricated into the supports and beams for the building over a 20 month period, a record for any building of that size at the time. The project established the company as a significant supplier of such innovative products over the next 20 years.

By the end of the inflationary 1970s the company, along with many others locally, was suffering badly in terms of both performance and profitability. Parts of the company began to be sold off by TI and in 1981 they accepted an offer of a management buy-out for the building element of the company. The new Directors were left with a one year lease of the Broadwell factory site, the equipment, 167 employees (down from 600), three businesses (purlins, lattice beams and custom-roll forming), as well as a large debt. After initial struggles the company was floated on the Stock Exchange in 1985 (when the company formally became Metsec plc). Using the funds raised, they finally purchased the site from TI and expanded and modernised, applying computer technology to design and manufacturing. 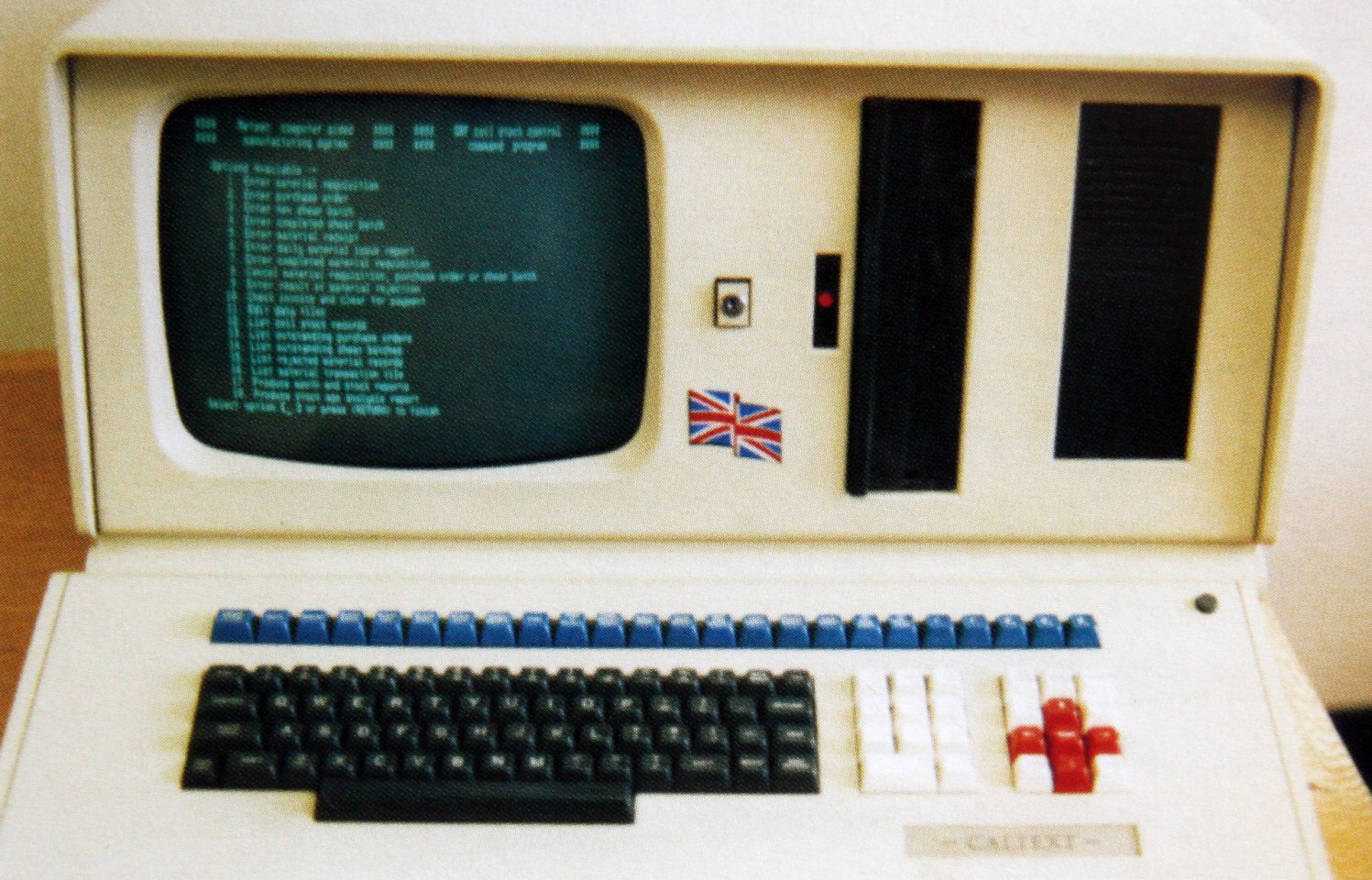 The first computers the company had in the early 80s only had little memory. The first production control system written by Andrew Griffin on an LSI computer in 1982 had only 64k of RAM. Derek Lum recalls, “We had lots of ideas about what we could program, but desktop computers simply didn’t have the capability of running large programs. I remember having to restrict variable names to one of two characters to keep the program within 32k of RAM, it made the programs very difficult to read, but they worked well and we clearly saw that the systems were making radical changes to the way business could work.’

The requirement for further capital investment meant that the business was sold in 1998 to the voestalpine group, based in Linx, Austria. Today Metsec, with some 300 employees, is the UK’s largest designer and manufacturer of light gauge galvanised steel purlins, side rails and mezzanine flooring systems.

Want to know more? download their corporate brochure from www.metsec.com. 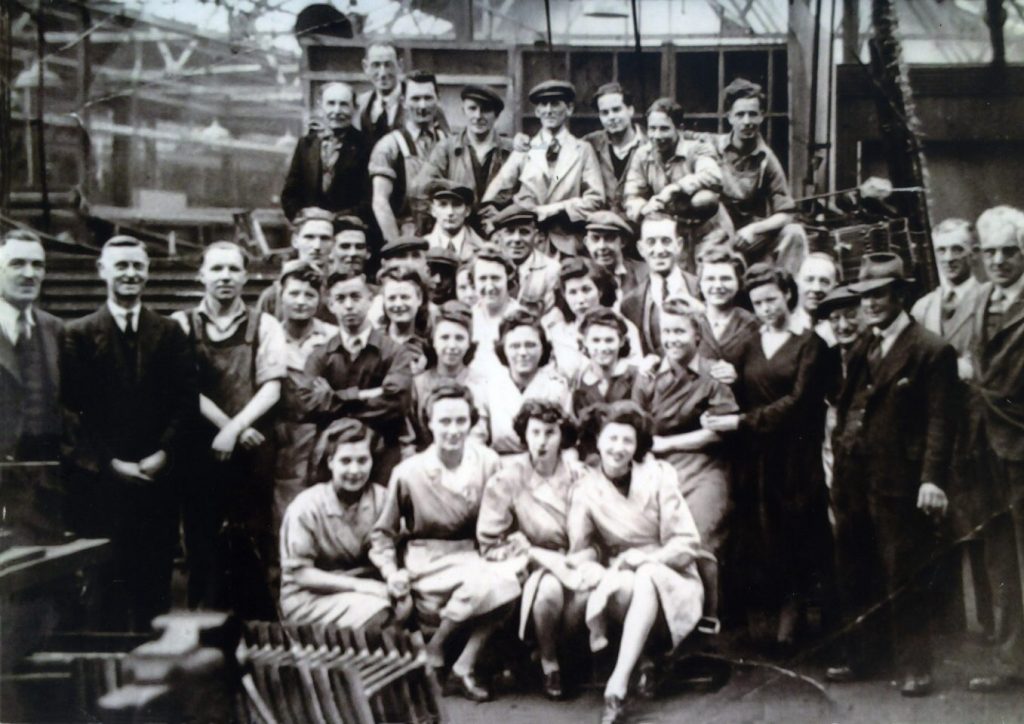 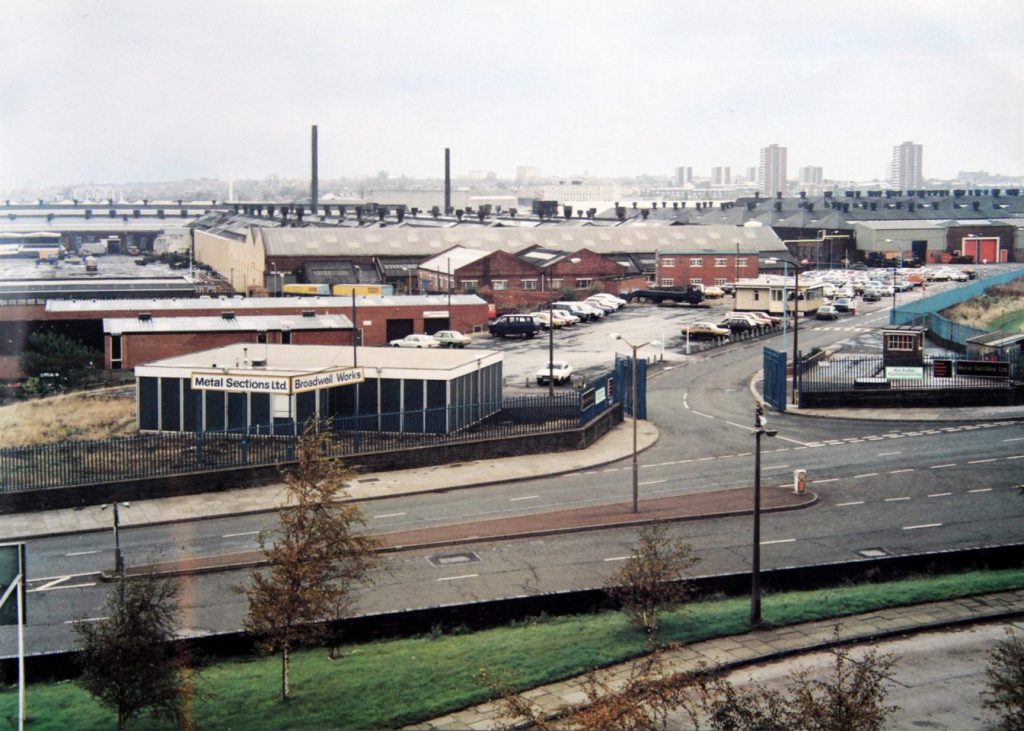 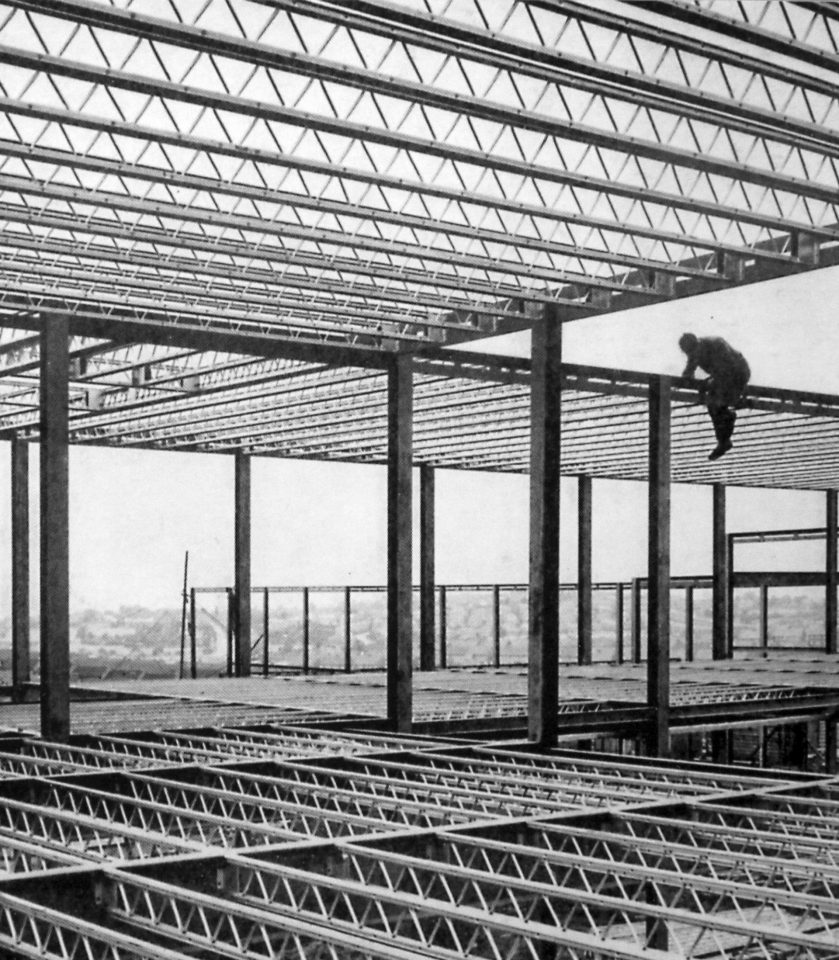 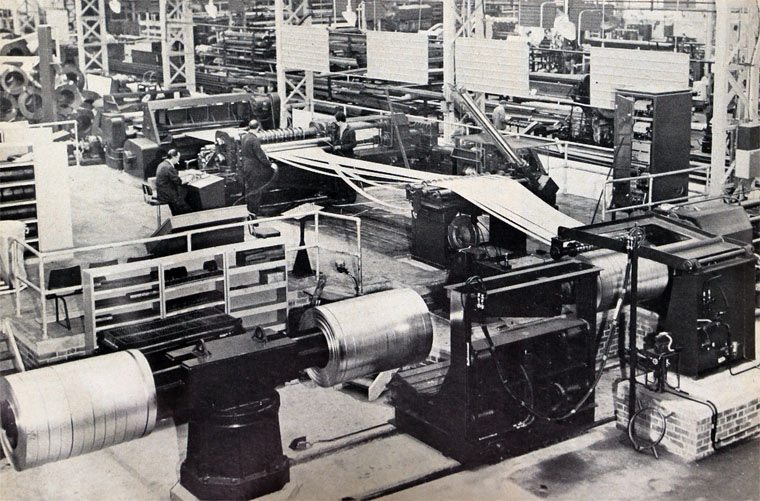 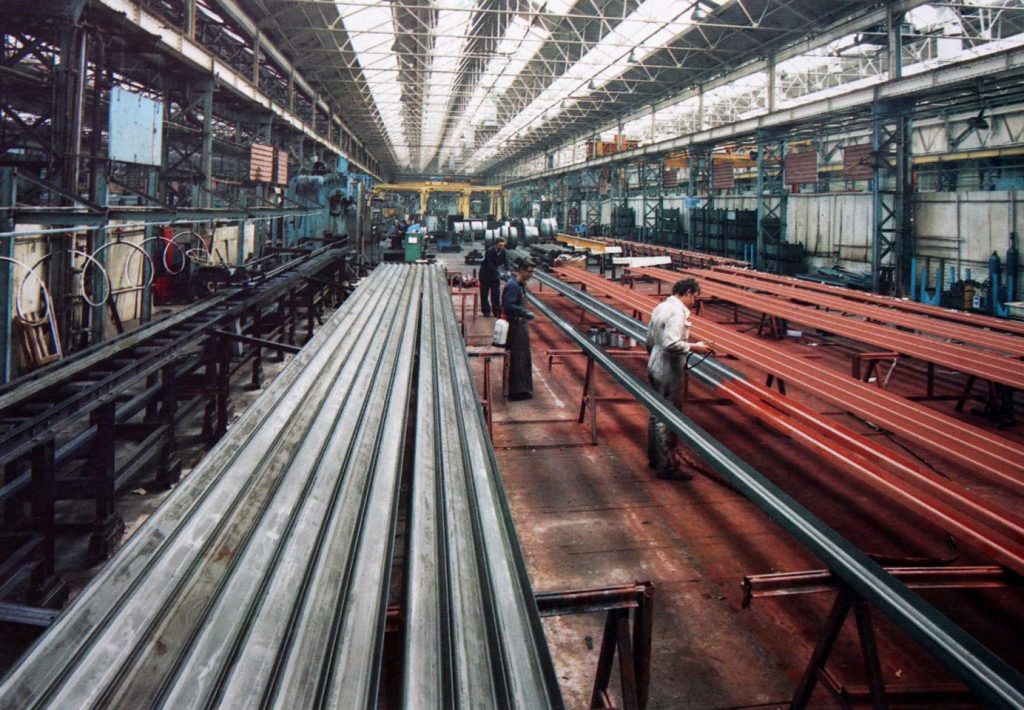 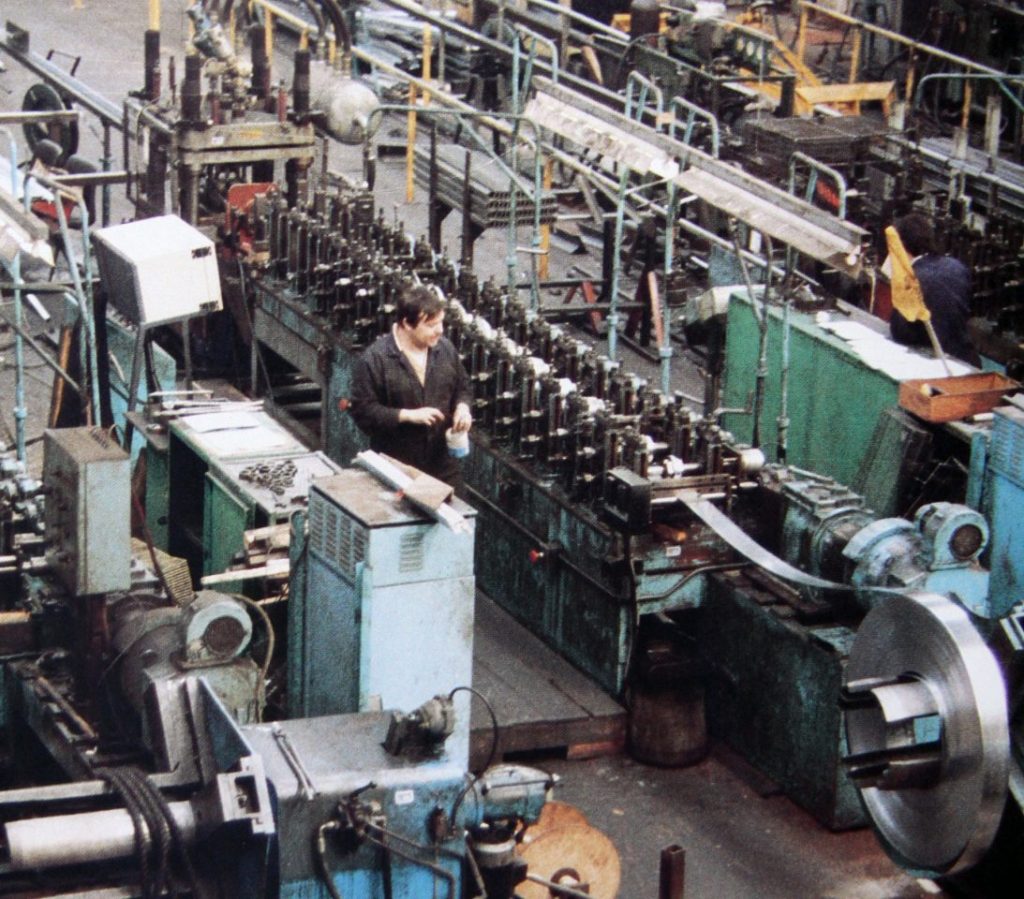 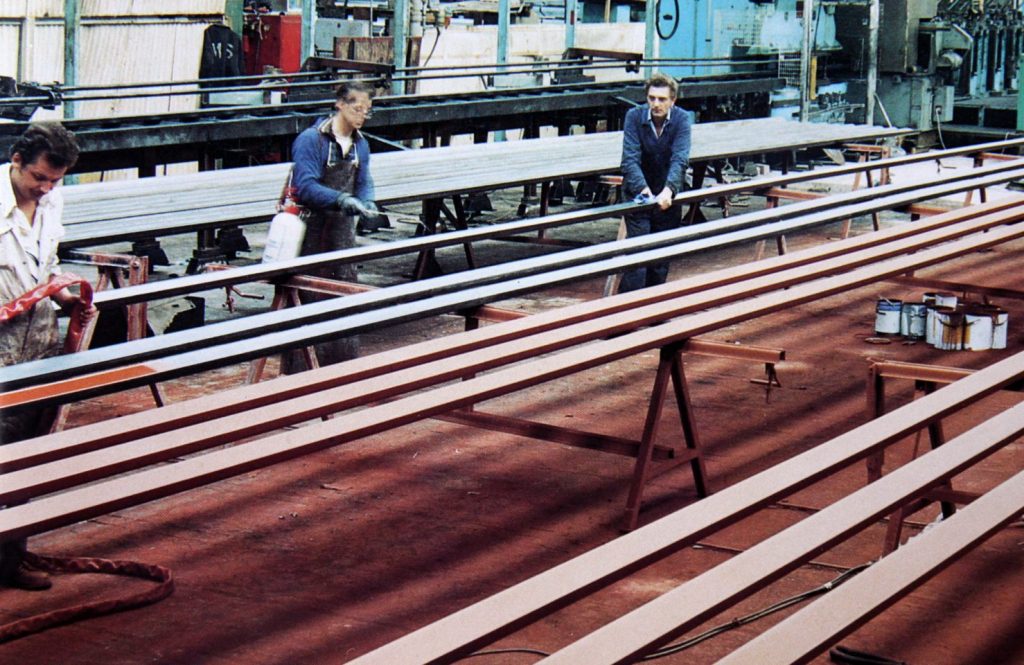 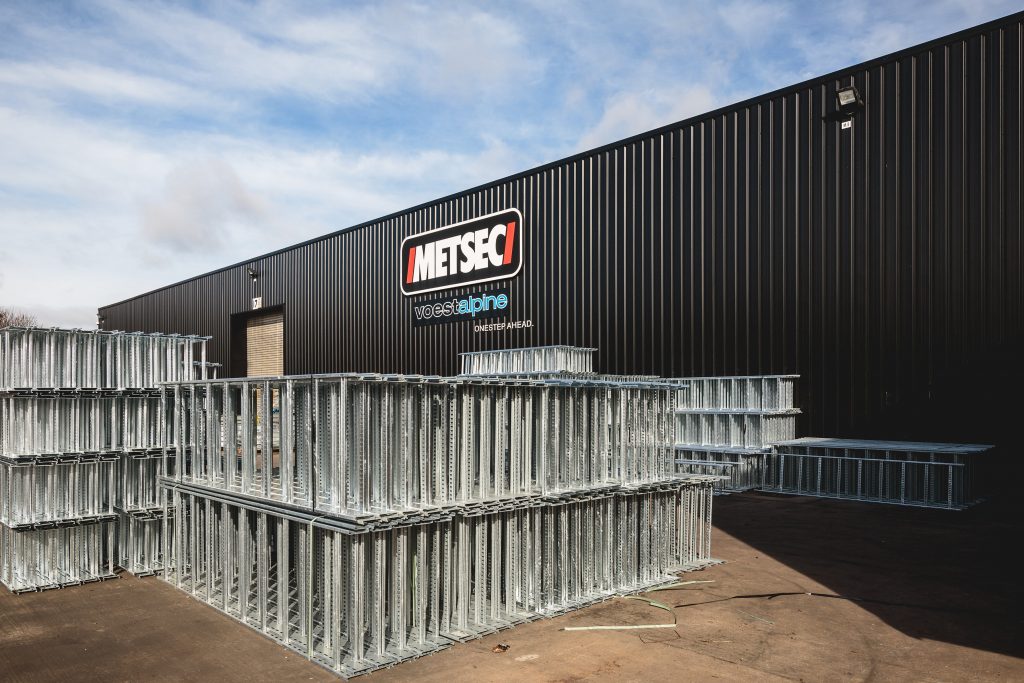 A selection of contemporary photographs of the factory site at Metsec in 2017.
Read More → 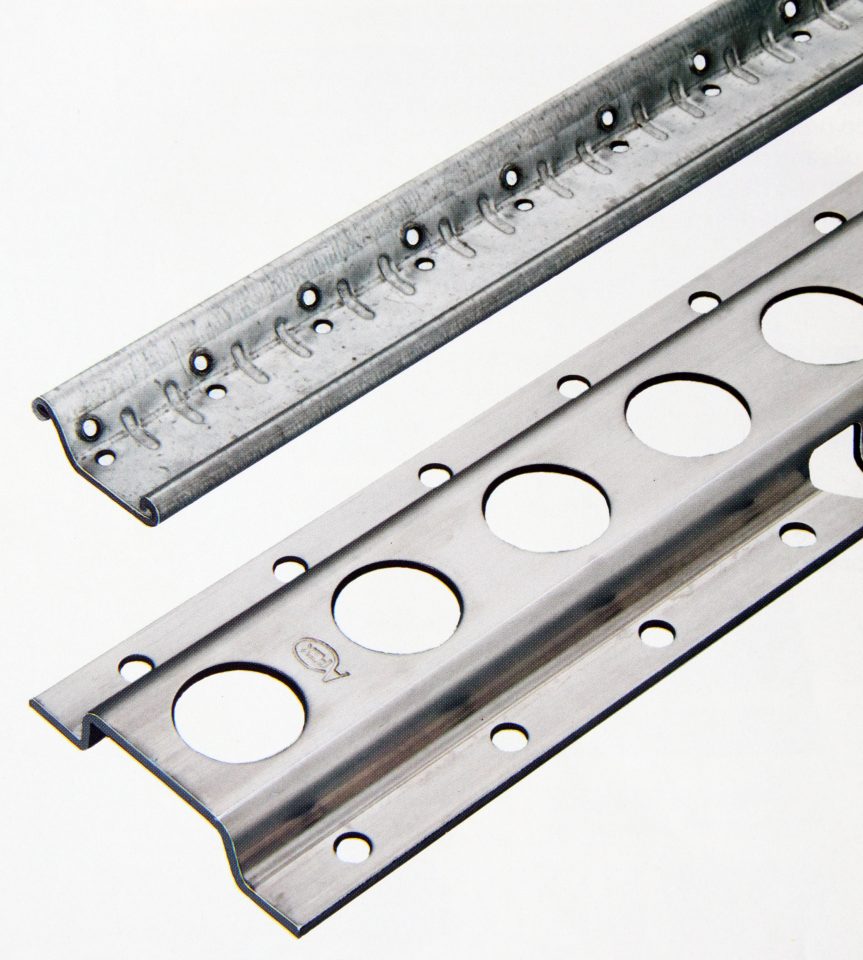 Dennis Lawley first worked as an apprentice roll turner at Johnsons’ Rolls in West Bromwich. He worked at GKN, then Lucas’s, before coming to work at Metal Sections.
Read More →